Following the near miss of the first match day where FCKP I narrowly missed out on promotion to the 1st league due to an inferior number of goals scored, it was back to square one with games against familiar foes as well as some new faces.

The day started off well for us with Kyle’s low drive into the bottom left hand corner being enough to secure 3 points against Phönix Wartenberg. Sterner tests were to come and the next match was, as always, a tough one against FC Lambajuuun e.V.. Luckily for us, our opposition didn’t make their domination of possession count thanks to some top notch goalkeeping from Marian and although both teams had good chances to score, the match ended goalless.

Next up was SFK Beus, who caused us to concede for the first time, their attacker finding himself with time and space on the edge of the area to score into the bottom corner. FCKP I put a lot of pressure on their goal with several chances, also hitting the post, but it wasn’t enough and the team suffered their first defeat of the day.

Things however went from bad to worse over the next 3 games as FCKP I were the victims of bizarre misfortune, but also didn’t help their cause with poor build-up play and individual mistakes. One of which succumbed FCKP I to their second defeat against Kickers Else04 following a misunderstanding between Marian and Pablo over who should deal with the loose ball one meter out. Under pressure from Else’s attacker the ball hit Pablo and trickled into the net off the post. Tim hit the post late on but FCKP I couldn’t muster an equaliser. Against Stehplatz ermäßigt things didn’t improve as a quick counter gave them the lead followed by a freak own goal by Marian straight from kick off – the ball bobbling over Marian’s foot as he looked to control Ezequiel’s backpass. Pablo had to leave so the team tried a new formation (2-3-1), which didn’t change their fortune. FCKP I were hit on the break following their own free kick, which should actually have been a penalty – the striker of Team 08/15 outpacing the last man to drill the ball into the bottom corner. A fourth straight defeat.

There was then a 30 minute break in play due to an injury in the game between SFK Beus and Stehplatz ermäßigt, where a player of the latter suffered a suspected dislocated knee cap. After a worryingly long wait for the ambulance, the injured player was taken to hospital. Fortunately for him, the knee cap could be moved back into place and he will make a swift recovery. We at FC Kickers Pufendorfer would like to wish him a speedy recovery.

Back to the football and FCKP I finally started to accumulate points again with a hard fought 2-2 draw against Rentnerbobs. Ezequiel P found his goal scoring touch with a brace. The first following a through pass from Kyle, with the second being a well taken toe poke into the bottom right corner. Next up was the French team Inter Carayou, with Kyle dropping back to take up the central defencive role and Toni occupying a more attacking position. The change worked wonders as Kyle delivered a long pass forward which met Toni, with his back to goal, to flick the ball with his head into the far left corner, leaving their goalkeeper stranded. Good ball retention and positioning in the midfield and attack also meant that the team could see out the game with little threat on their goal. A 1-0 victory was the reward.

For the last game Marian played on pitch with Toni putting on the goalie gloves. Although our opponents, Glück auf Utopia, had shown themselves to be tricky opposition in their previous games, it was FCKP I who took the lead, and deservedly so: Amir scoring a headed goal from a corner kick. However, despite being in relative control of the game, FCKP I conceded the equaliser as Kyle missed two opportunities to clear the ball under pressure with the next phase of play ending in a low shot driven in from outside the area. Daniel even had a golden opportunity to steal all three points with a one-on-one 2 meters from goal, but his shot unfortunately was straight at the keeper.

The result left FCKP I in 7th position out of 10 on 9 points, meaning that they would remain in the 2nd league, setting up the mouth-watering prospect of another El Clasico against FCKP II in the next match day. 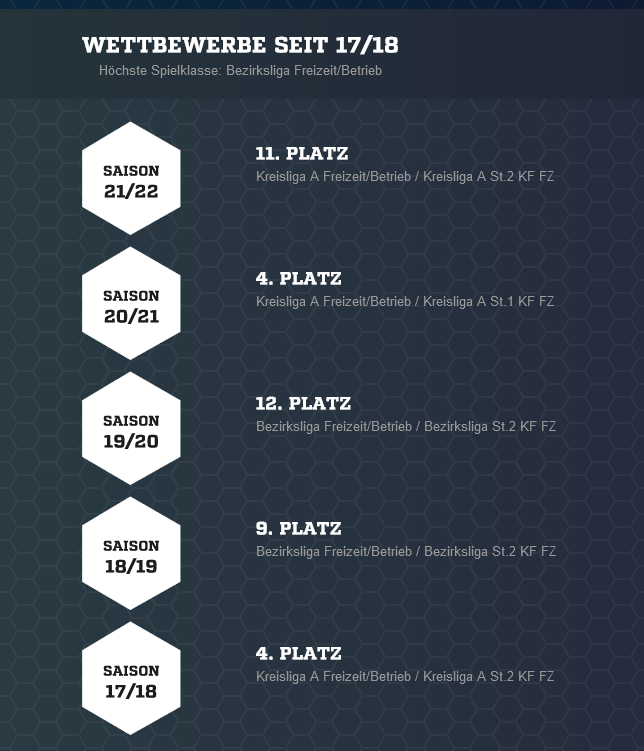