FC Kickers Pufendorfer of Berlin travelled to the beautiful city of Poznan in Poland on Saturday the 6th february to take on local team HKS Odlew Poznań. The match was being hosted and arranged by Odlew as part of an initiative between both like-minded clubs. For FCKP, it was a wonderful opportunity to visit the historic old city, to sample the local friendliness and to represent the multicultural essence of the Berlin team on tour. For the local side, this was a chance to offer a fine Poznan welcome and to put on an occasion for the home fans and visiting reporters (no really this time!). 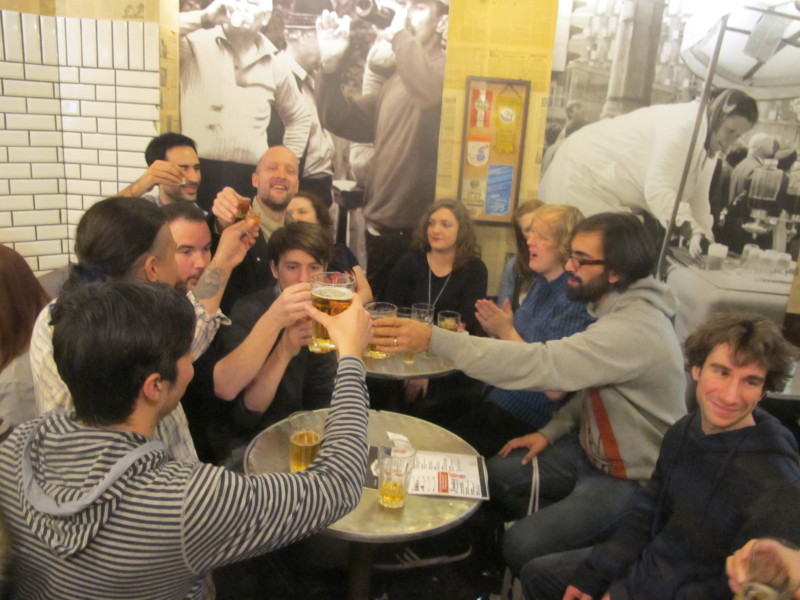 There was plenty of fanfare before the game as fans settled into the Aleja Armii stadium and an expectant atmosphere began to build. The exchange of gifts between the sides portrayed the healthy state of relations between both towns with some fine local Polish beer heading in one direction and a bottle of Jaegermeister heading in the other. Before any notion of partying could take hold however, there was the small matter of the morning’s on-pitch contest to deal with first. Would the teams seem as friendly once the whistle blew for kick off? The fans of both sides were hoping otherwise. 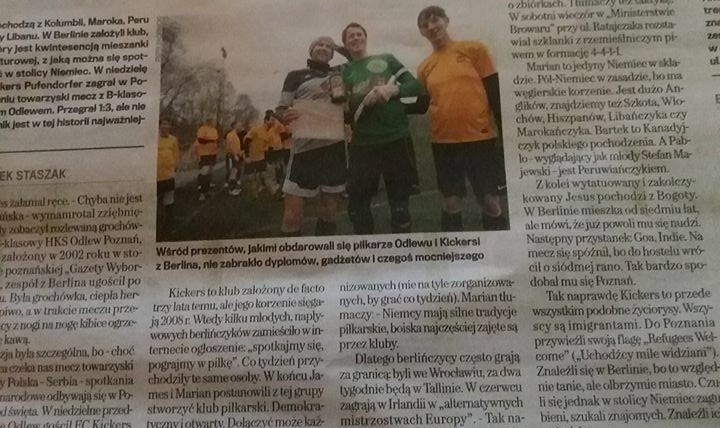 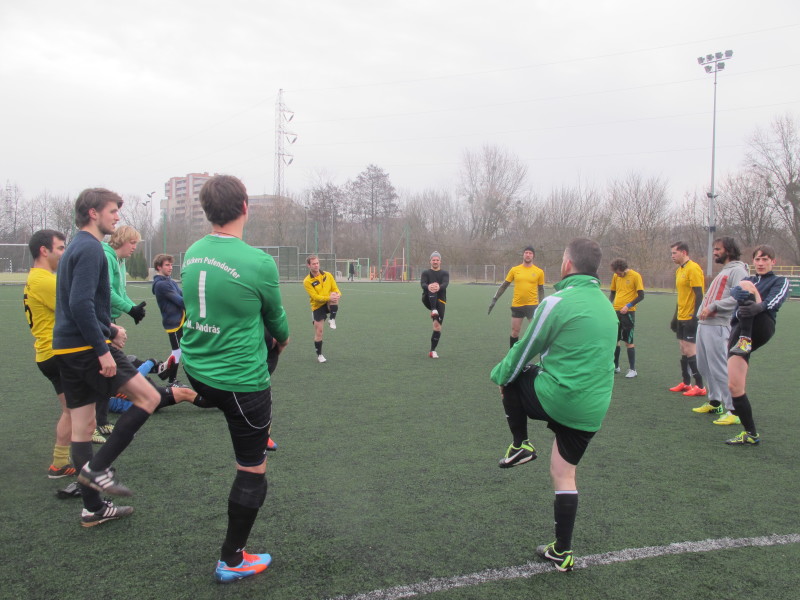 As soon as the first tackles crunched home, it became apparent that neither FCKP nor their hosts would be treating this as anything other than a serious game. There were TV cameras present at the sides of the pitch and, although they were here to cover the colour and international nature of the game, you could tell from an early stage that most players on the pitch were thinking at some level, “after all these years, now’s my chance!”. 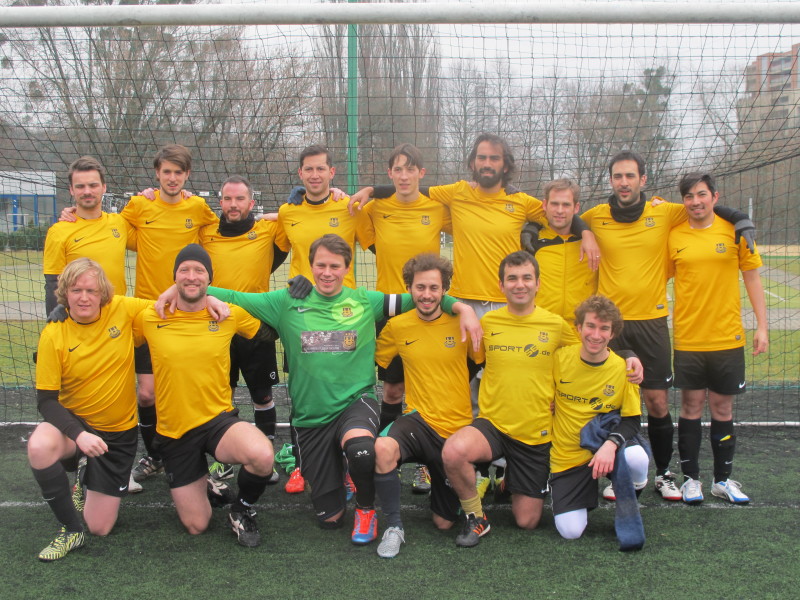 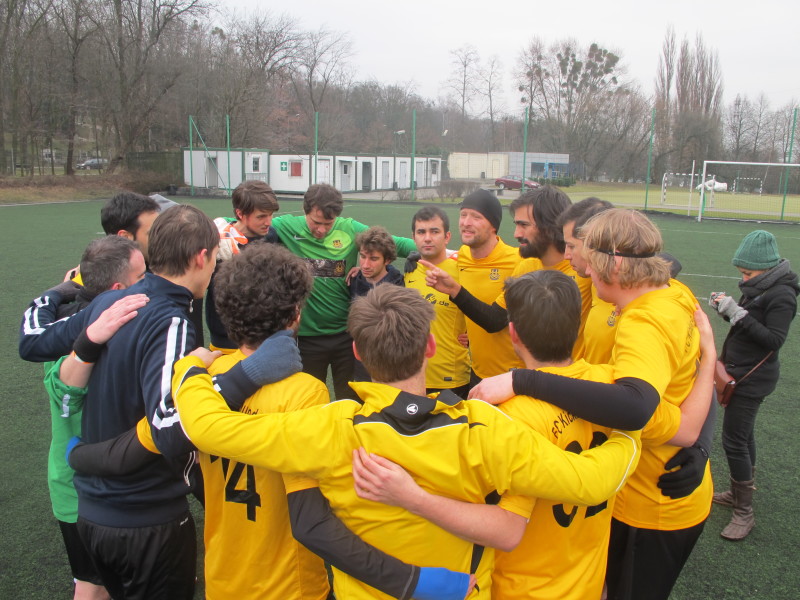 As such, there was nothing held in reserve as both teams got stuck in to the contest during the first half. For Pufendorfer, the Latin American duo of Diego and Pablo epitomised this as they chased down opposition players all over the pitch like a pair of giant yellow coyotes running after grey-clad roadrunners in slow motion. Odlew themselves gave as good as they got- as a result, the teams were still deadlocked at 0-0 when half-time came.

After the break, the sides emerged with the same dogged enthusiasm for battle but with a bit more technical craft to their game.  Clement Adam represented the best of this for Pufendorfer as he linked well with Marian Andras down the right wing. One fine combination brought the opening goal of the game when Adam was upended by a late tackle after racing onto a flick from Andras.

The fiery Frenchman did well to dust himself off and keep his cool, allowing Marian to take the resulting free kick. The dead-ball specialist whipped a vicious left-footed drive to the far post which eluded all efforts to clear it and gave Andras his second goal from a free kick in as many games. FCKP erupted with glee and celebrated like demented lambs frolicking around the pitch- they had come a long way for this goal and it really showed.

It was nice for Kickers that they made the most of this period of ascendancy because it was cruelly snuffed out just 8 minutes later – but it was only fair that Odlew were the next ones to have a chance to cheer.  A fine jinking run down the right-hand channel by playmaker Diego resulted in a low cross that was deftly flicked home at the near post by prolific striker Lars to make the score 1:1.

The local fans burst into life and really started to get behind their heroes. This led to a sustained period of pressure from Odlew and saw them take the lead on 75 minutes when a crisp low cross from the left was met, not by the onrushing striker Lars, but by the outstretched boot of Captain James of FCKP. When his flicked interception rocketed into the top corner of his own goal he was left only with the scant consolation that he had at least prevented the Poznań striker from scoring.

A goal behind, FCKP raised their game again and pushed forward in search of an equaliser. They came close on many occasions -none closer than James himself who almost made amends for his earlier contribution to the scoresheet with a viciously dipping volley from 20 metres which shaved the crossbar. Unfortunately, Odlew proved adept at exploiting the space as Pufendorfer pushed forward and they put the game out of sight on 85 minutes with a fine individual goal by midfielder Coudra who finished low and crisply from the edge of the box. 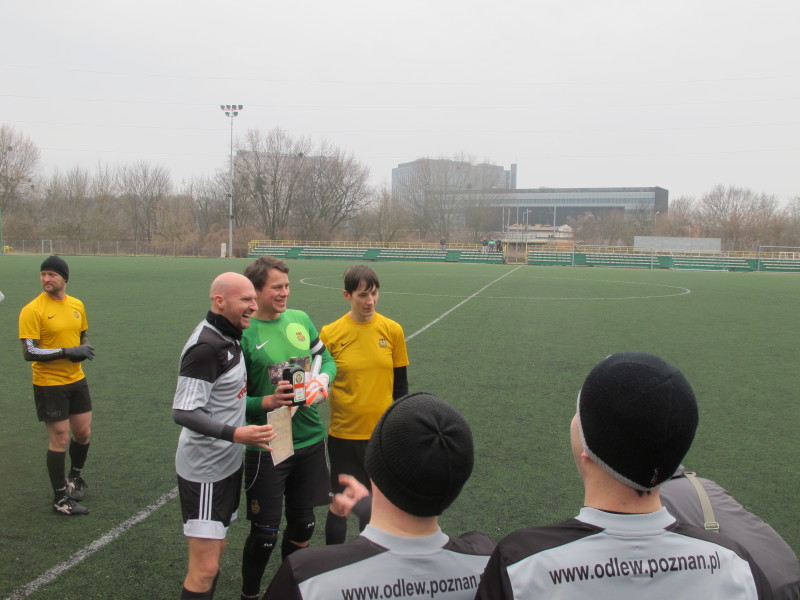 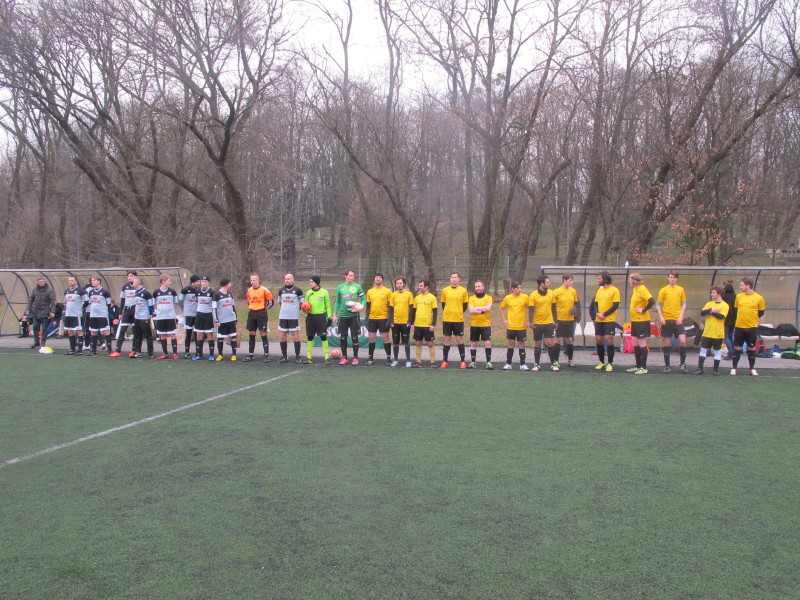 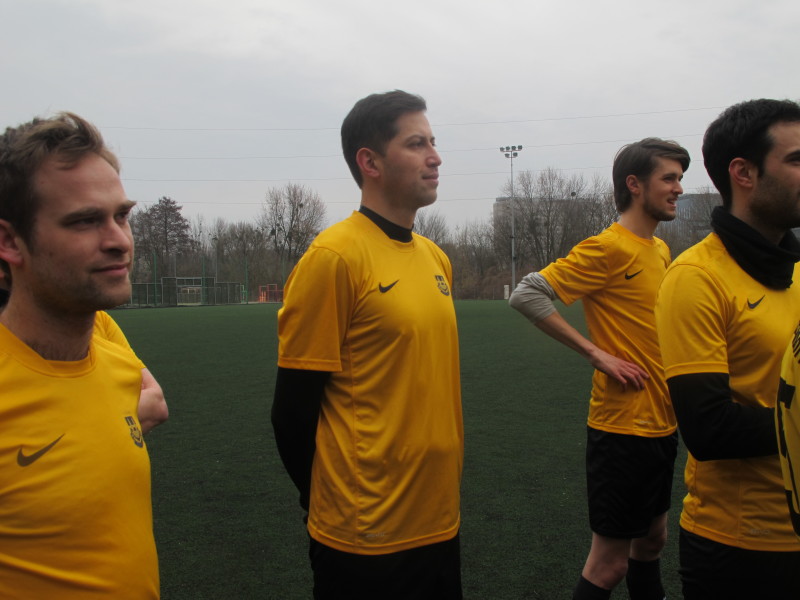 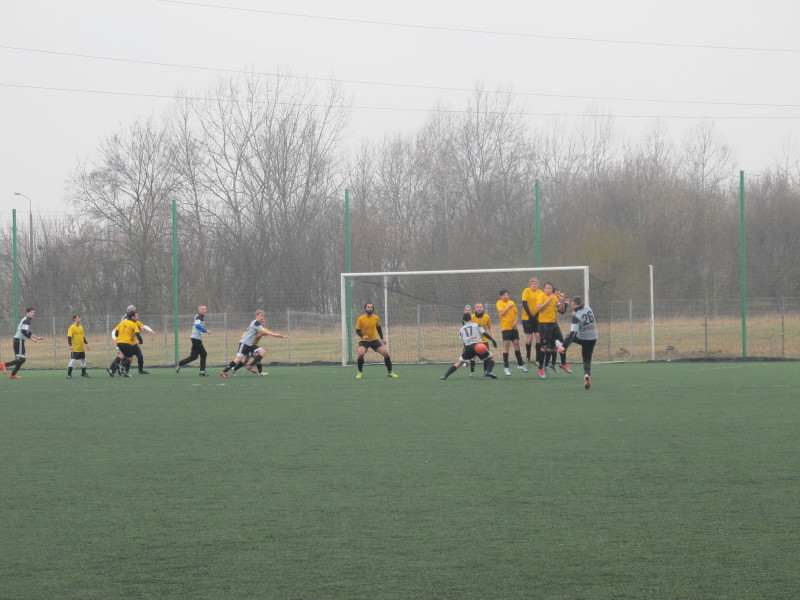 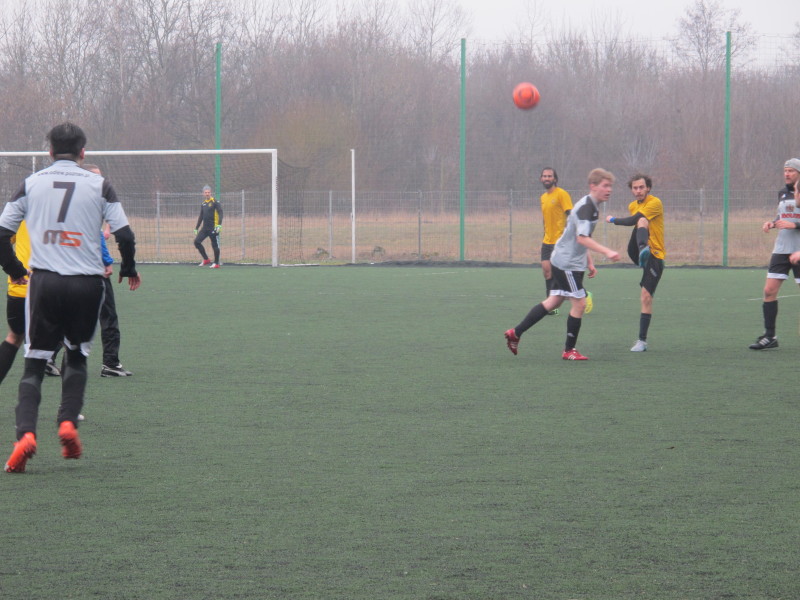 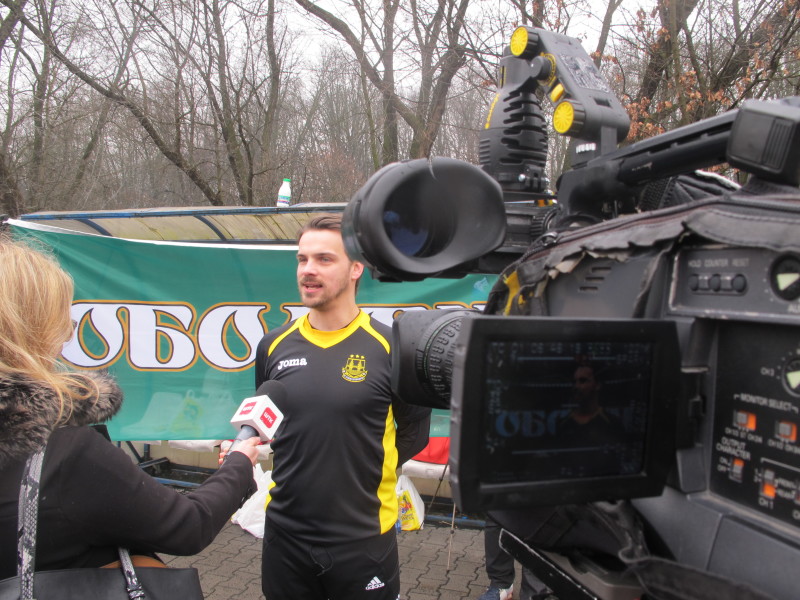 Though the game finished with a 3-1 victory for the home side, there were many fine contributions by the travelling FCKP squad- none more notable than that of Jesus Rueda. The bustling full-back took his ambassadorial role very seriously and had managed to visit as many locals as he could the previous evening, spreading the goodwill and cheer which was the theme of the trip. Although his draining humanitarian exercises meant he could only be on the pitch for a short while, his playing style left an impression on the fans befitting Colombia’s rich footballing heritage. https://www.youtube.com/watch?v=TRj3dKKp9tI

As the players from both teams trudged off the pitch and mingled in the soft, damp, March chill, revitalisation was at hand in the form of wonderful hot soup that was dished out to all-comers. This was yet another example of the generosity for which Poznan became well-known as hosts during the 2012 European Championships. Given the good will between both teams, I think we can look forward to a rematch in the near future. Your place or ours? 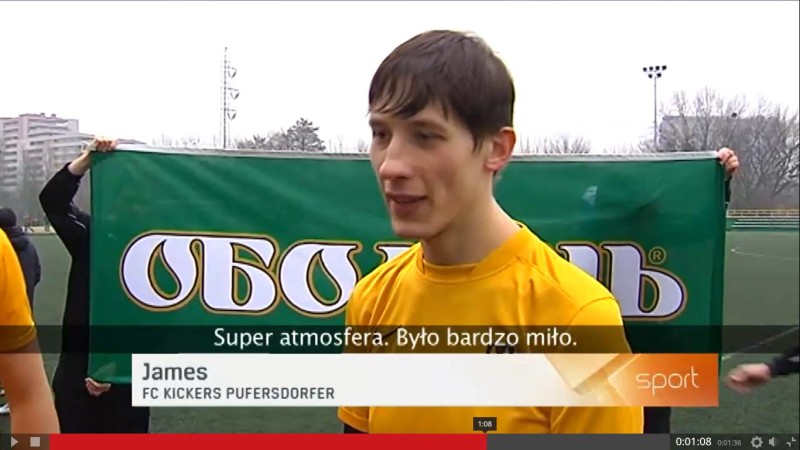