FCKP on Tour: The Romanian Spring – Part I

Personally I don’t know if were thinking about the fact that we were setting our feet on Romanian soil, despite the fact that it was with original Romanian cuisine, draft beer and a long night out that the team and friends celebrated my birthday on the night of arrival in great style. Honestly, as you might guess, we did not really care. It was cheap flights that brought us to the sovereign state of Romania – formed in 1859 – but that wasn’t the only good thing about Bucharest, as we were able to immerse ourselves in a foreign football culture. Just like last year in Poznan, Poland, our opponents and hosts offered great hospitality!

The Romanian capital was our next destination outside of Germany, 1295km and roughly a 2 hour flight from Berlin. Most of us travelled from Berlin, though Clement flew in from Dublin from a business trip, Alejandro made it down from Copenhagen, Dragos flew in from his Skiing trip in Italy and Adonis joined us from a romantic trip in north-west Romania. Friday was arrival day and also my birthday, so we quickly shuttled the group in cabs from the airport to the hostel and got ready to celebrate the night out.

East European cuisine  is well known for being really hearty, so I reserved a table for the team and friends at the well known (but maybe a bit touristy) “Caru’ cu bere” restaurant. We made our way through numerous rounds of beer, had a festive dinner and the team wanted me to give a speech for my birthday so I did pleasure them. The mild early spring temperatures of Bucharest accompanied us through the narrow old town streets with its various night life offerings. Here you saw a group of tourists lifting their full beer glasses for a toast, there you saw a light dressed young woman shaking her curves in one of the club windows. It was hard to get our group together but with excellent communication skills on mobile phone applications we managed to get into a basement of a bar to continue quenching our thirst for beer. We danced, laughed and I think none of us gave a thought to the game the next day. The only thing everyone knew was the meeting time. 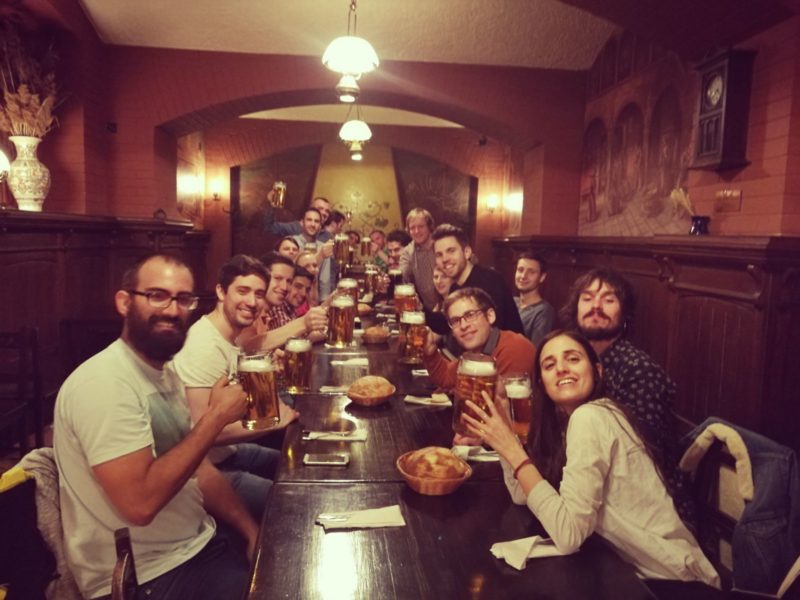 The weather was not the best but of course everyone wanted to see some from the city. Small groups were formed and each did some discovery and sightseeing. Our first game of the weekend had a scheduled kick-off time of 4:30pm, and the opponent was C.S.F. Athletico Floreasca from the north of the city. As it was quite easy to get to the pitch, we took the subway for few stops and walked another 5 minutes, where we were greeted by the opponents dressed in blue and white. Bucharest is not Berlin, and people here are happy with what they have, even with a small self painted club house which offers showers and a changing room converted from an old shipping container. 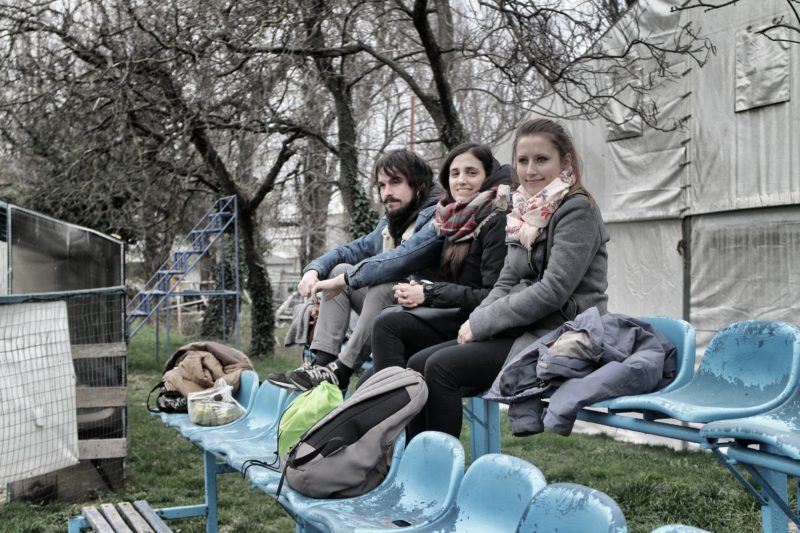 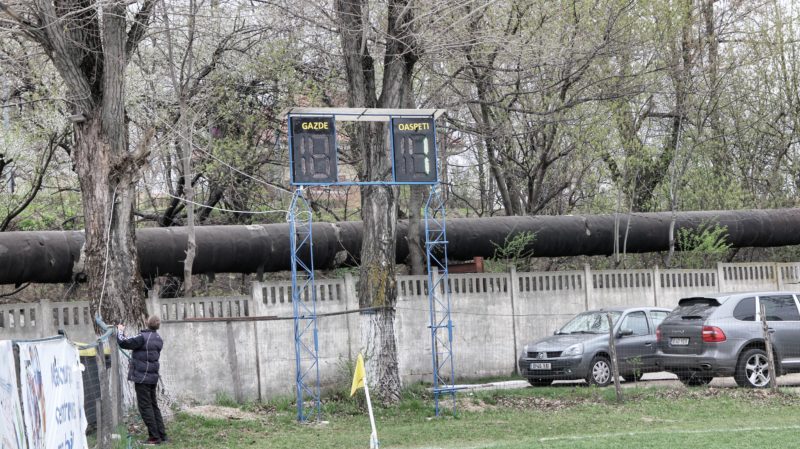 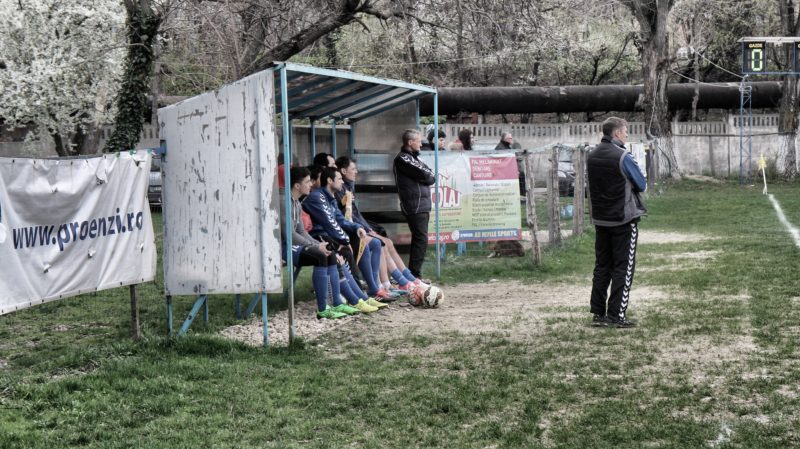 We got ready, got our gear on and had a first glimpse of the pitch, which was not so appealing to our technical skilled players who expect a perfectly flat surface to move the ball around on, but it wasn’t to be. A young lady was officiating the game and drew our players’ attention with her natural beauty and in the last minute of the game also with her bad decision, but more about that later on.

Our team was set up by Jon, our interim coach on this trip, who we have to say a big thank for doing the warm-up, tactics and coaching from the sideline. We watched the opponent’s tactic in the first minutes of the game and adjusted ours accordingly. It was difficult, if not impossible to play a decent passing build-up game when in possession due to the quality of the pitch but we adjusted to it and managed to create our first chances. We tried our luck on the not-so-worn-down sides of the field and managed (I think it was around the 35th minute) to play a ball on the right wing, from where Adonis crossed it in front of the goal and Steffen slid in for the 1-0 lead. A lead, which was not protected very long, and we went into the break with the score tied at 1-1. Fresh with new energy, we started where we left off, and continued to attack via the wings. Edoardo managed to spring down the left wing and cross the ball towards goal, where Alejandro stopped the ball perfectly and hit it in for the 2-1 lead (see video). Again, this was followed by a lapse in defence and another goal for the opponent, when a blocked shot landed 20m in front of Tolga’s goal and the Floreasca midfielder hit it perfectly into the left bottom corner. Once more we gained the lead when Alejandro (again through the wing) went 1-on-1 with the opponent defender, nut megged him and went down to the byline to pass the ball into the back of the defense where Steffen waited, stopped the ball and curled it with his strong left foot into the net (see video). We put in more effort to go two goals ahead but a foul close to our box gave the Romanian team a good chance to score. The free-kick was perfectly shot with some spin over the wall into the right corner leaving Tolga no chance. The minutes went down and when everyone seemed happy with the 3-3 draw, the last attack of the opponent led to a clear hand ball, which went unnoticed by the beautiful referee, and led to a final result of 3-4 against us. All appeals were unfortunately ignored. 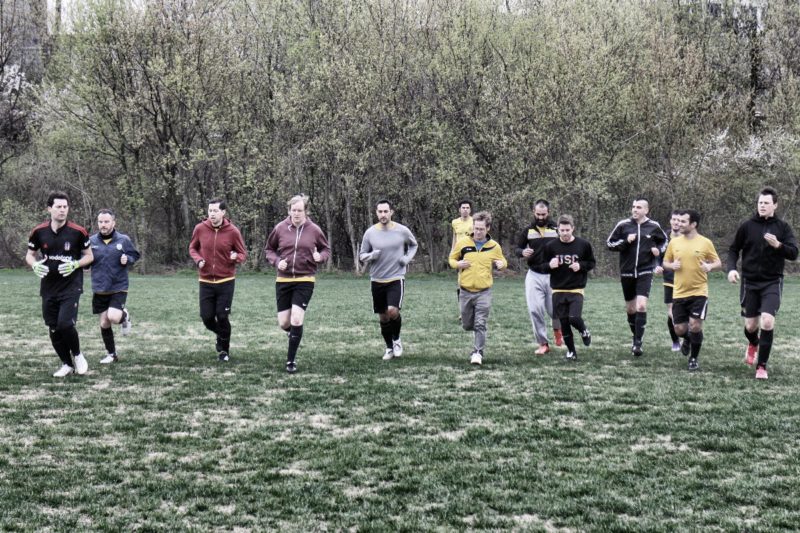 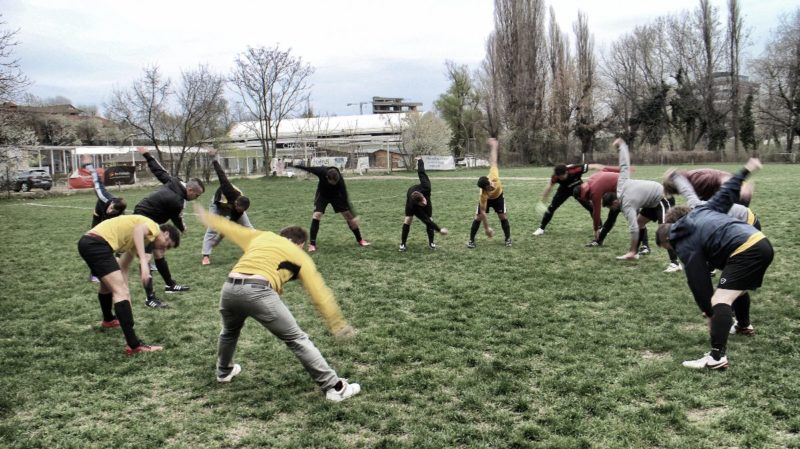 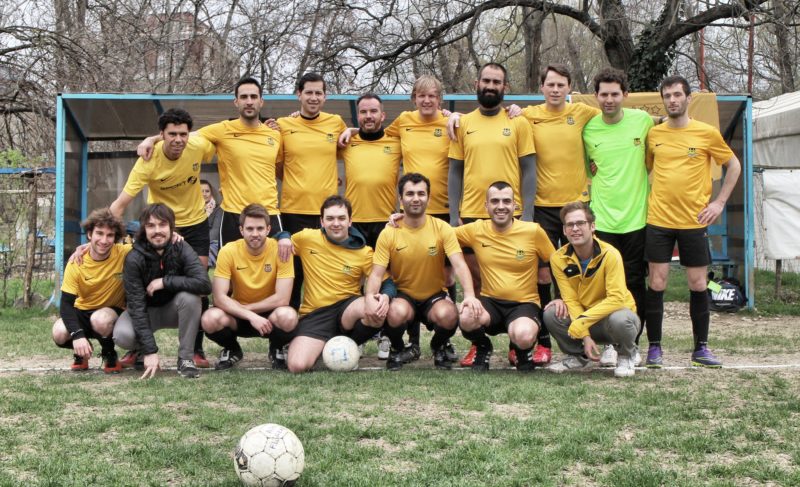 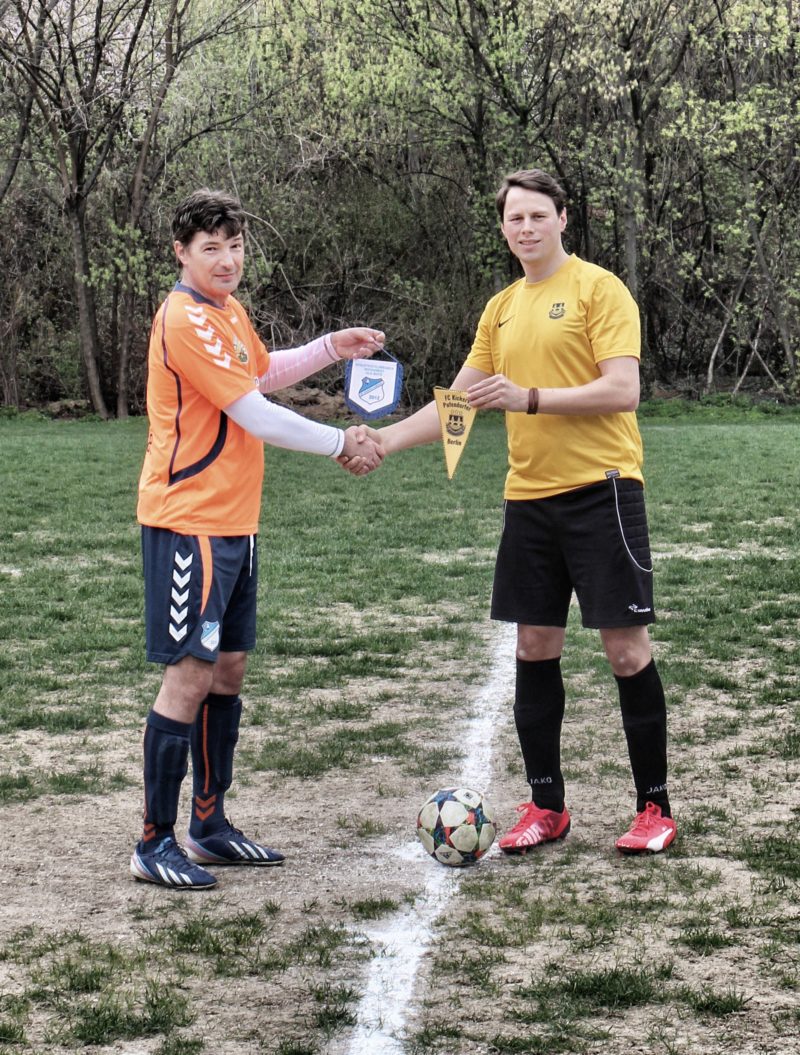 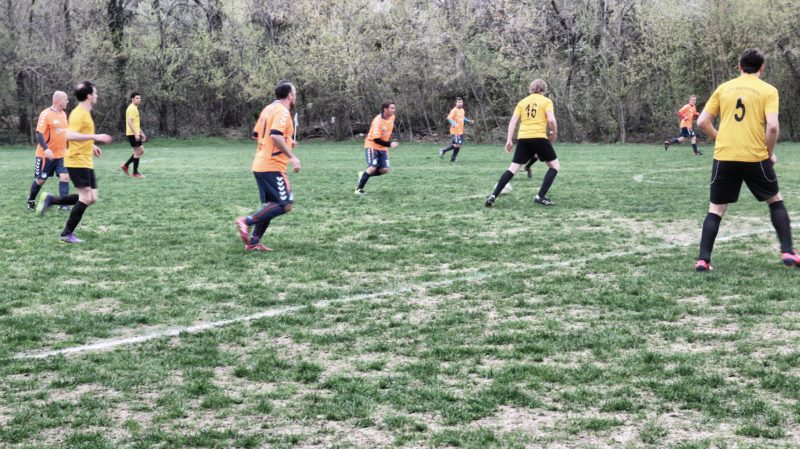 However, we gave a solid performance in this first of two games this weekend and left the pitch in good mood. We then followed an invitation of the opponent team to join them for after game drinks and a nice barbeque. This hospitality shows that football is not just about the game itself. As the opponent showed today, football is a sport to make friends, exchange cultures and show respect of the long journey made. Razvan, the captain of C.S.F. Floreasca, presented local gifts (see photo) to our team, including Romanian liquor which we certainly will drink together as a team on a special occasion. On behalf of our team I send a big “thank you” towards C.S.F. Floreasca for hosting us for this friendly match, organizing the pitch and officials and of course the lovely BBQ after the game. We handed over a trophy as our “thank you” and hope to show you the same hospitality one day here in Berlin. Till then all the best! 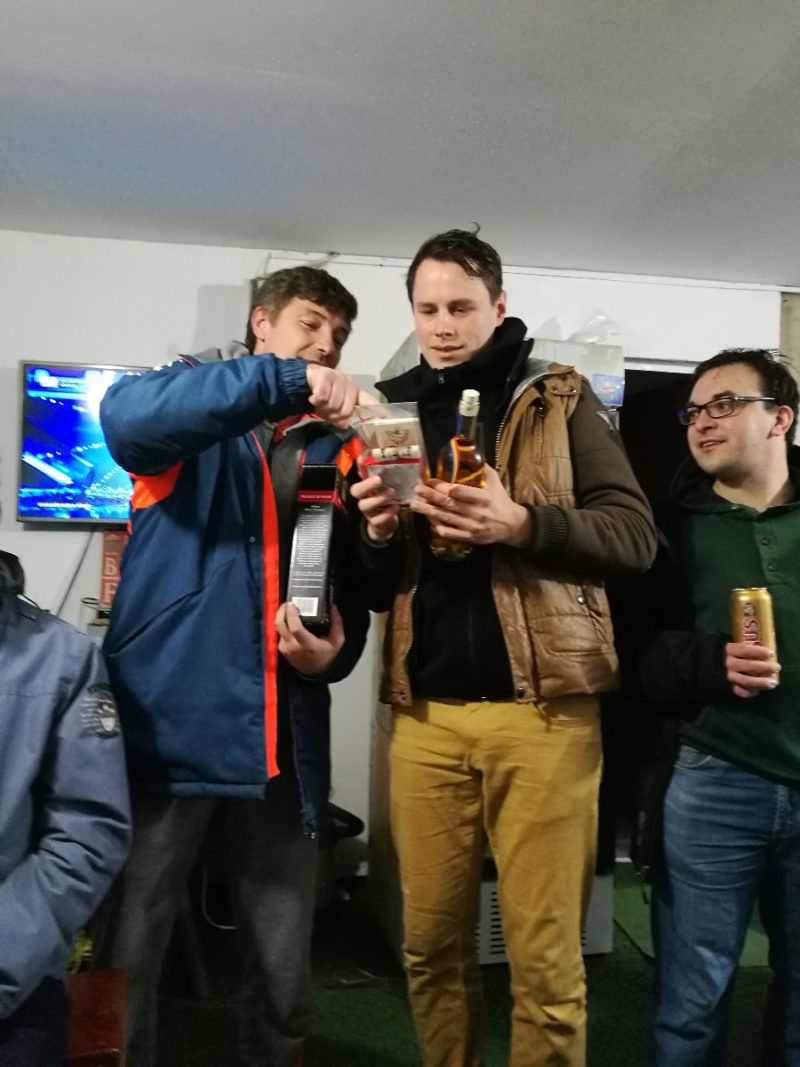 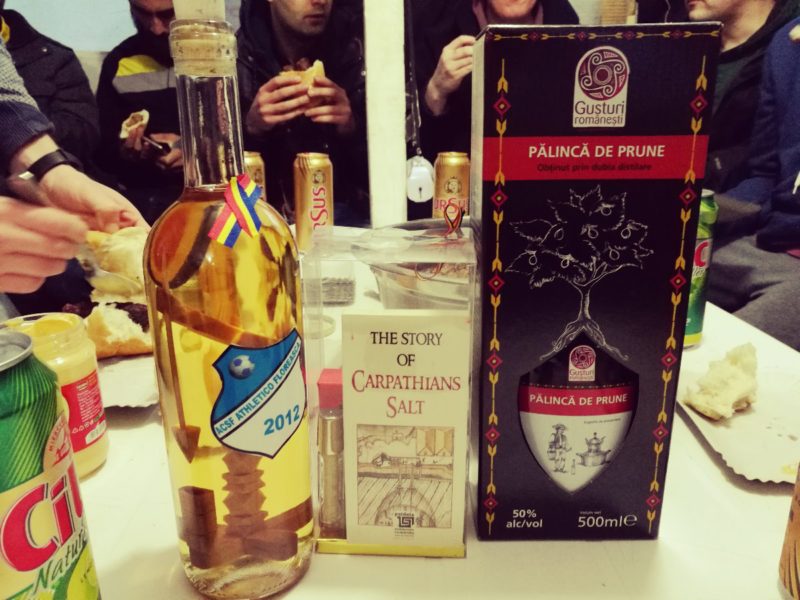 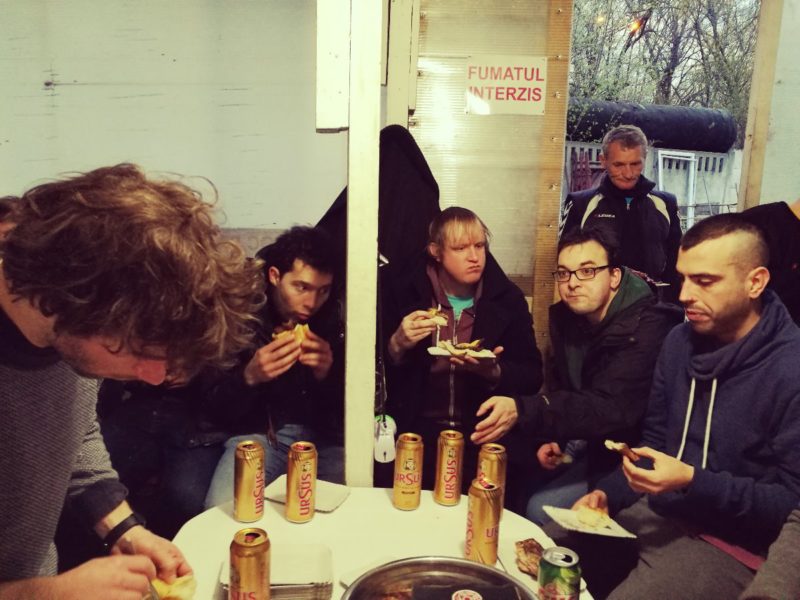