Remember Riga 2015? No? Well, let me revel the memories quickly for you out there: In summer 2015 I thought of another international friendly match, this time in Riga, the capital of Latvia. Being a frequent visitor of the country the years before  I could establish a few contacts to coaches and players of amateur teams such as RIGA UNITED FC or FK LIELUPE. A quick chat between a good friend by now, Justin Walley (former head coach of RIGA UNITED FC LADIES), brought us to the idea of bringing more teams together and play a little tournament – the Baltic Four Cup was born. Our team travelled with 12 men to Riga and played against two teams from Latvia and one team from Estonia (Rumorio Calcio) for the title…in the end we got 3rd. Despite our final place in the tournament, the Cup itself was a real success with a lot of positive feedback…so here we are now at the 2nd edition of the Baltic Four Cup ’17, in Tartu, Estonia!

Plan A was to get the tournament co-organized with the team of RUMORIO CALCIO (Tallinn based team founded by expats), but with their Nordic league game schedule crossing our aimed tourna-ment date, we had to approach a Plan B. Several hours of research through Estonian amateur leagues brought me across the Tartu (second biggest city in Estonia) based team FC TRT77. It’s leader and player Teet Arukaev responded to my message quick and was more than curious about our tour-nament and ready to co-organise and host it at their home stadium in Tartu. Teet got another Estonian team (Tammeka) into the Cup and I (once more through my friend Justin Walley) got AFK Aliance from Riga into the starters field. We agreed to the time frame, booked the pitch time and got us a referee to lead the tournament…we were ready to go! 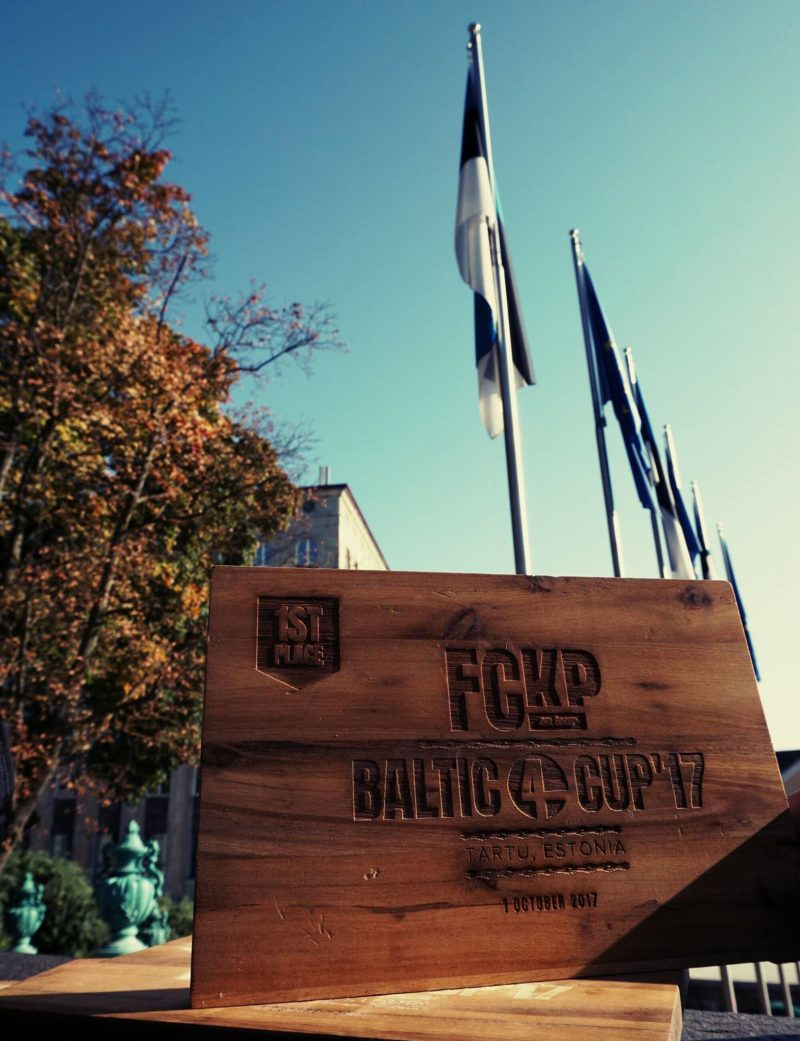 Sunday, October 1st on a very grey autumn day we made our way early from the hostel to the pitch in the southern part of Tartu. Once arrived at the nice little venue in between restored soviet style buildings, with a nice stand colored in blue and white, a perfect new lawn greeted us as well as the co-organizer Teet from FC TRT77 and his team. The stadium opened recently and was funded by a crowd funding project, also we as a team bought a share few years back, when the crowd funding started. Our cabin was (basically like we had in Bucharest too) large container, well heated and equipped with a bathroom. We dressed up and got out on the pitch to warm up and get ready for our opening match against FC TRT77. 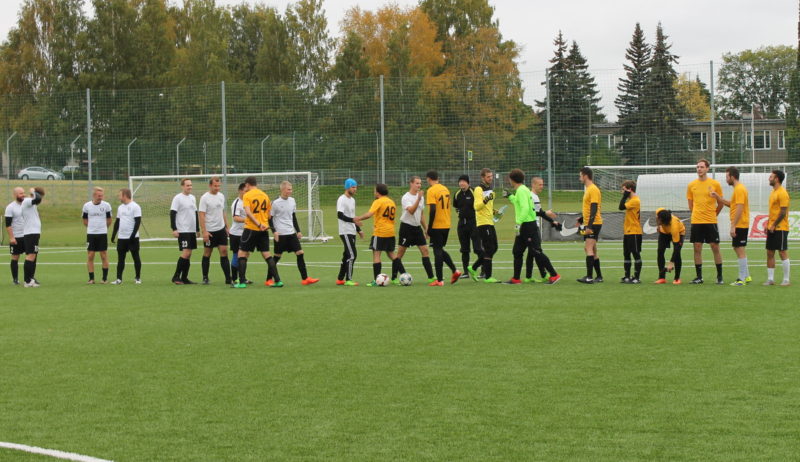 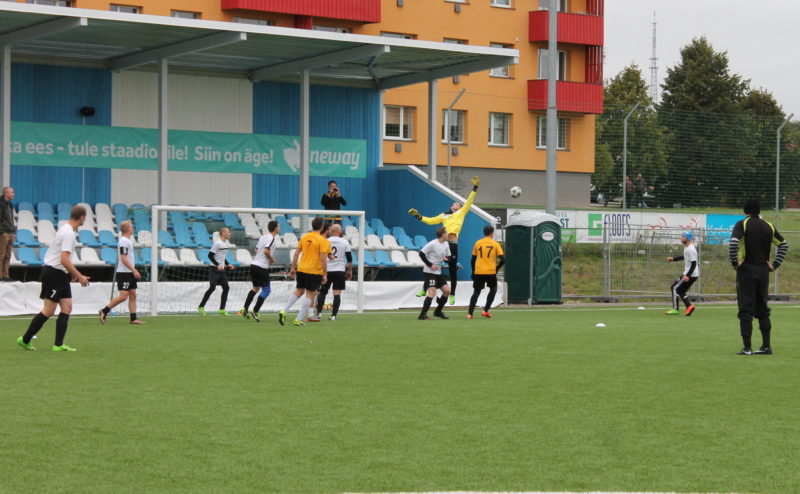 The match started good for us, we kept the ball calmly between our lines and waited for the gap in the front, no hustle game play, no false passes, no wide kicked crosses…just simple football. The tactic went good and Dragos, our Romanian up front could score top corner goal for the 1-0 lead. Of course we got eager to go for more and let the other two teams of the tournament know (which watched the game from the side line) that we are aiming on bringing the 1st place home to Berlin this year. We don’t want to miss tell you that FC TRT77 was really encouraged, they had their chances, came close to the goal and were a competitive team but maybe it wasn’t just their luckiest day. We, for the mean while, continued to score up. Steffen and once more Dragos brought us the 3-0 final time result and a good start into the tournament.

AFK Aliance (Riga) could gain a 2-0 victory over FC Tammeka in the game after and after observing their game, we knew who was our biggest competitor today.

We had to kill time and waited for our next match against AFK Aliance, but just before that, Teet’t team FC TRT77 tried to gain their first goal against Tammeka. Unluckily again it was an effort without any outcome, Tammeka scored 3 goals and their goalie had a calm day fishing no ball out of his own net. 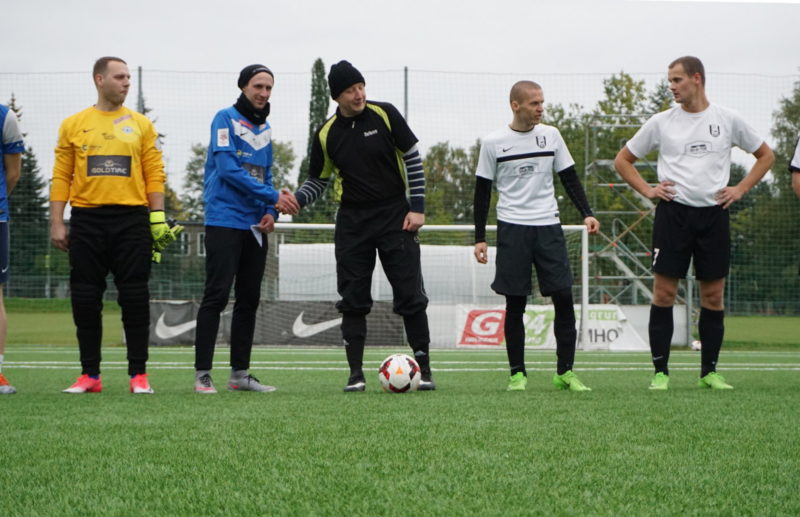 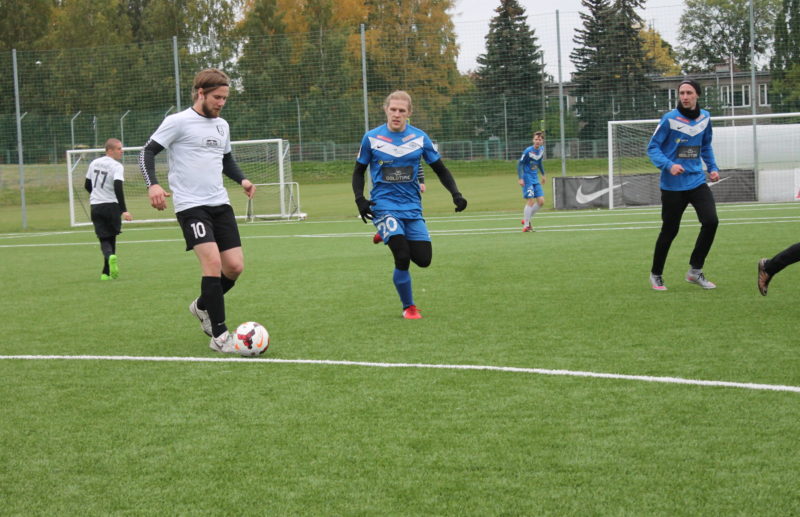 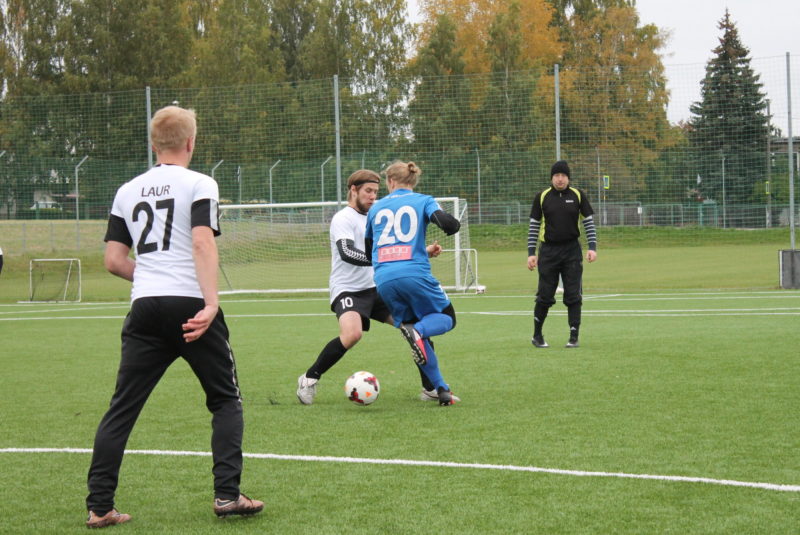 It was on, the game of the day, Germany versus Latvia…a quiet rough (compared to the previous matches) game should await us, but also technical wise it was a top level game. Our first big chance resulted out of a free kick we had about 12 meters in front of the goal. We faked a free kick shot, passed it to the left and the shot from one of our guest players was saved by the goalie, bounced back to Steffen who artistically managed to shoot once more towards goal but was saved again by the defense of the goalie. Just minutes after that, the Riga team had a player in same distance as our free kick central in front of our goal fighting with Diego for the ball. Diego covered him good but suddenly the opponent player turned quick to the right and hammered the ball quickly into the top left corner where it hits the crossbar and then the post before it went into the net. A clearly easy access for voting it as the “goal of the year”. We were in a deep shock but fought back with all our energy and the aim to go at least for the equalizer. On a quick attack we sent one of our players with a suitable pass towards goal letting him have a 1-on-1 with their goalie but a defender slid into the legs of our man – as the last man – and received not a red card from the referee to our surprise. The free kick went nuts and we lost the game 0-1. 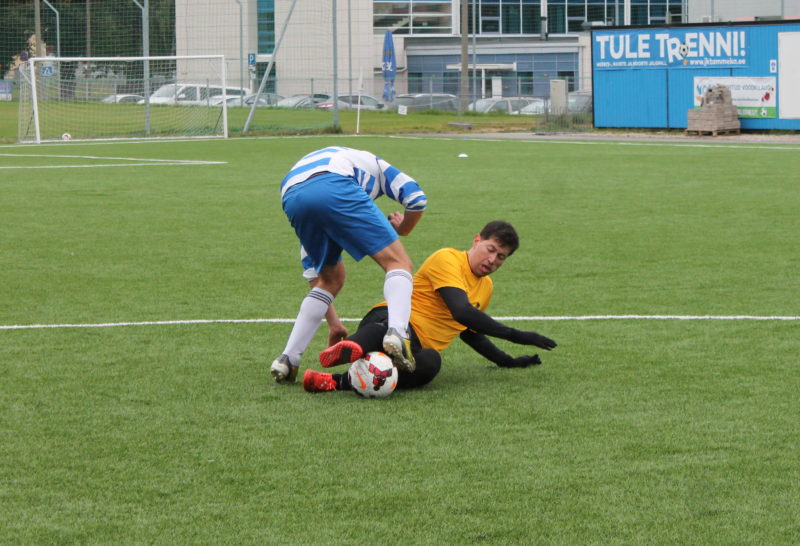 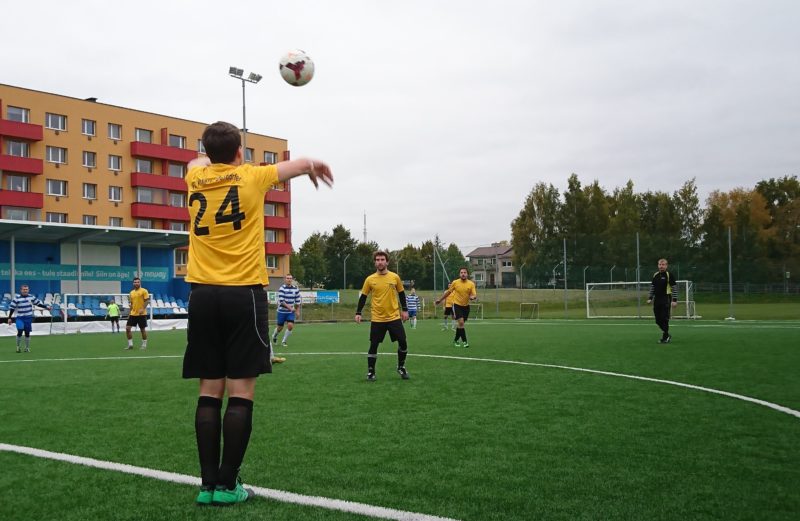 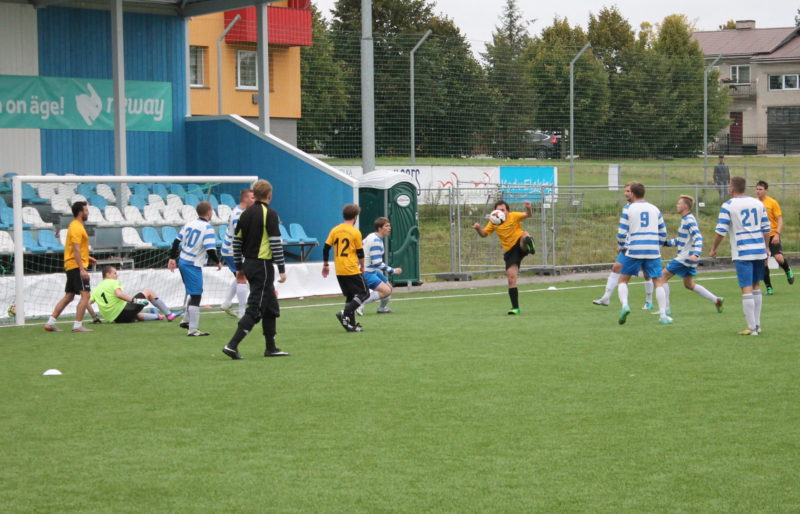 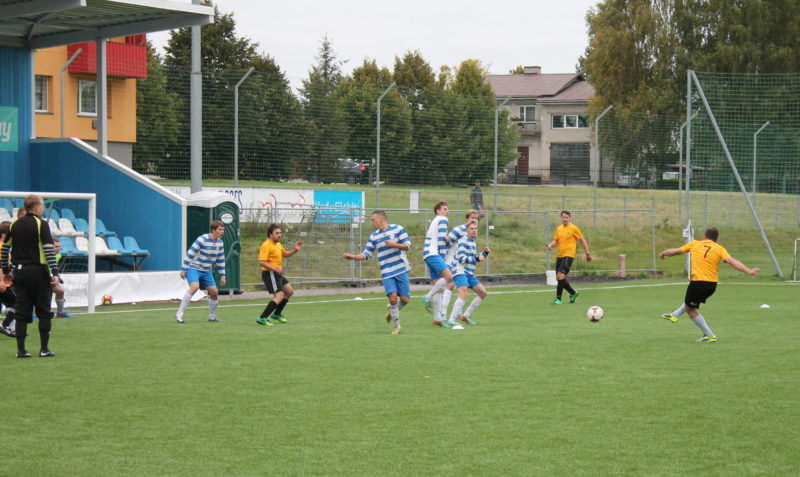 We had to put our hopes now into the last match of the Latvians which followed right after against the host team of Teet. Surprisingly they had a lot of chances this time and went almost 1-0 ahead. But when you don’t use your chances in the front, you get your payback in the back. Two quick goals got AFK Aliance their third win for today. All what we could aim for now was the 2nd place, at least 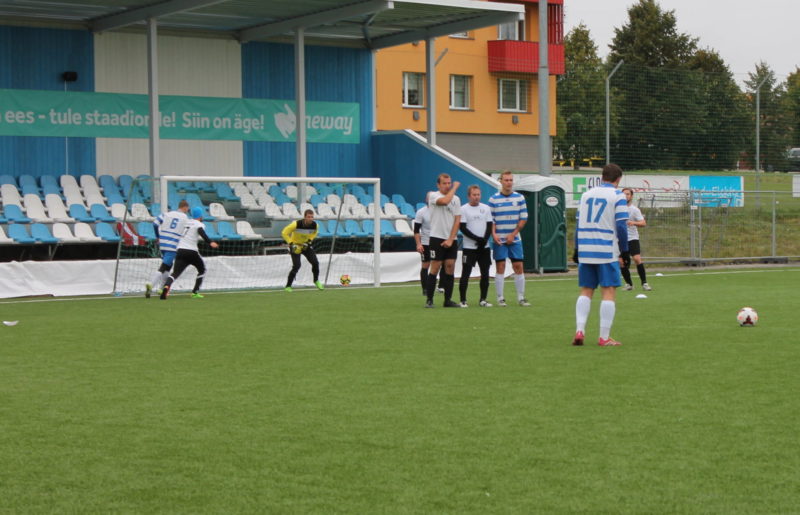 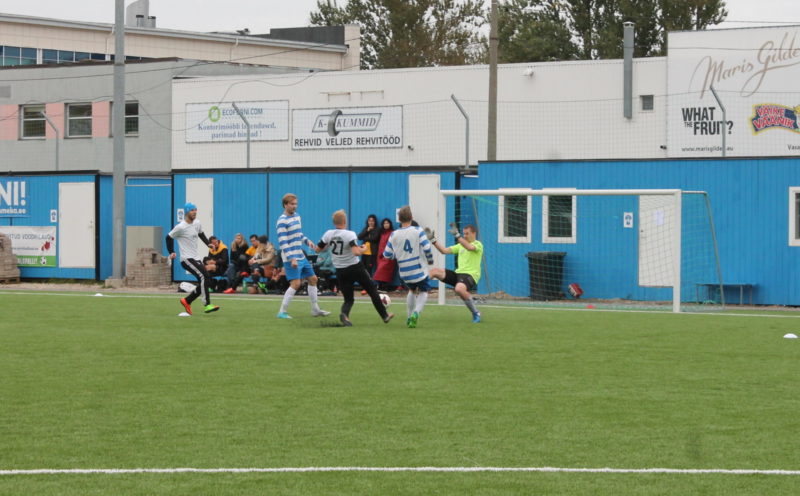 The team of Tammeka had a good midfield which could been observed already in their previous games and this fact made it mostly hard for us in the defense. We were not well organized because of their quick and technical game, but when they lost the ball we drove quick attacks on the wings moving the ball towards their goal. Our guest players (recruited from the Erasmus program of the Tartu University) scored two nice long distance shots before we conceded the 1-2 close to the end of time. We feared to draw out of this game but a last attack scored the 3-1 win and we finished 2nd overall on this tournament. 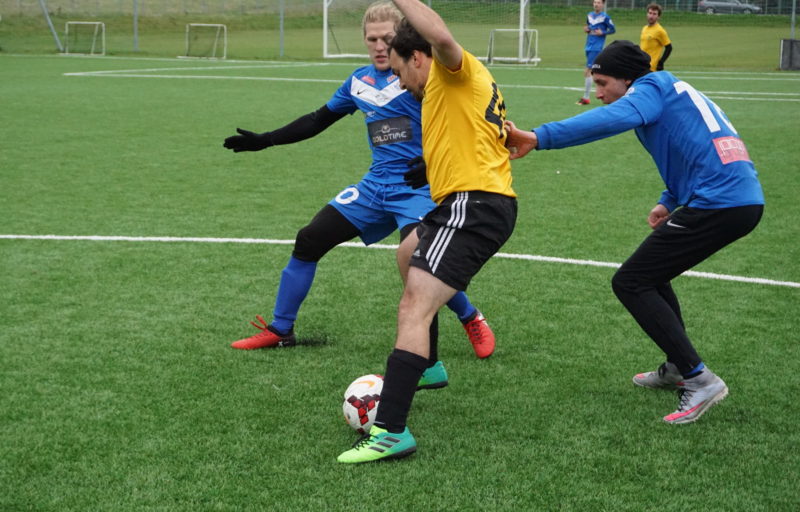 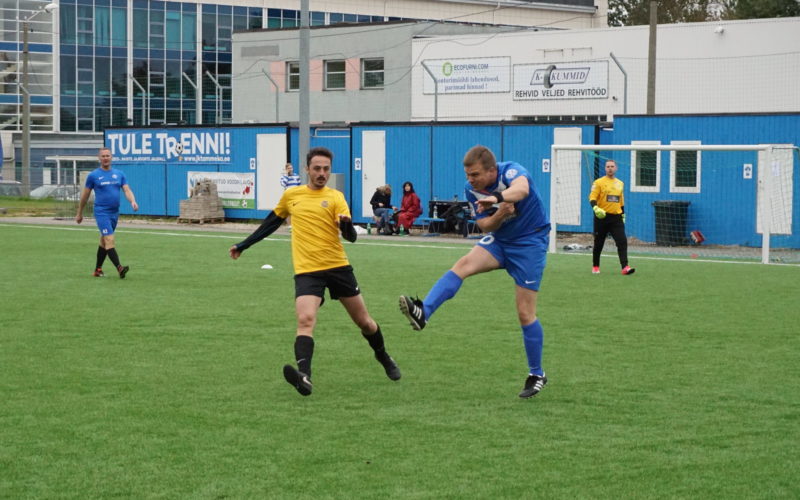 The tournament was closed with a small ceremony were we provided wooden trophies for all placed teams which we individually designed and manufactured in Berlin. We also thanked Teet and his team for co-organizing the event in Tartu, Estonia. Thank you for the pennants from the opponent teams and especially the beer we received from the Latvian team on behalf of their captain.